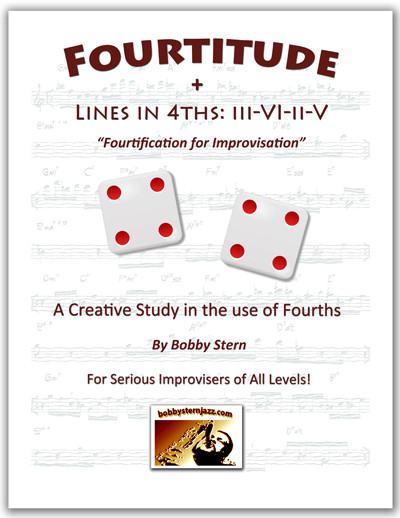 A Creative Study in the Use of Fourths

As the title suggests, "Fourtitude + Lines in 4ths: iii-VI-ii-V7" is a happy fusing of the two named, previously individual Shortbooks™ from 2018 and 2017, respectively.

The interval of a perfect 4th (P4th) has been an important melodic and harmonic component of the improvising musician's tool box since the early 1960s, being introduced and popularized by pianist McCoy Tyner, and featured in the compositions and solos of pianists Herbie Hancock & Chick Corea (among others); B3 organist Larry Young; saxophonists John Coltrane, Joe Henderson, Wayne Shorter and Joe Farrell; as well as trumpeter Woody Shaw and guitarist Karl Ratzer, to name just a few. Mastery of the P4th remains an essential and challenging skill set for the present day improviser.

Literature on the subject has included pianist Walter Bishop, jr's “A Study in 4ths”, published in 1976 and now currently out of print, as well Ramon Ricker's “Technique Development in Fourths for Jazz Improvisation”

In the late 19th and early 20th Centuries, harmony based on fourths, known as Quartal Harmony, had been introduced via the symphonic works of several renowned European classical composers; namely Claude Debussy, Maurice Ravel and Bella Bartok, being among of the most prominent.

This volume, which fuses two previous Shortbooks™ "Fourtitude" and “Lines in 4ths – The iii-VI-ii-V7 Progression”, explores various methods of utilizing the Perfect 4ths in pairs to create captivating and original melodic lines and sequences that weave seamlessly in, out and through the underlying harmonic structures; as well as augmented (aka diminished 5th or b5) and diminished 4ths (sounds Maj 3rd) in the context of the common iii-VI-ii-V7 harmonic movement.

May the Fourths be with you!