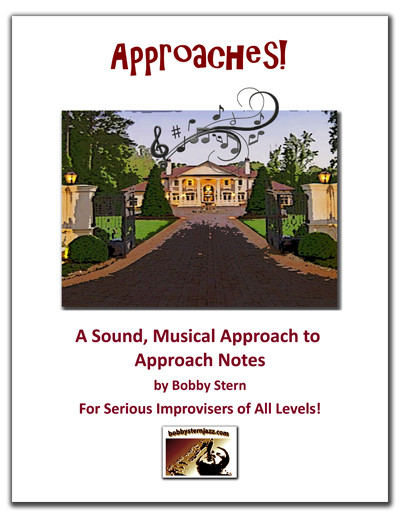 The term "approach notes" is exactly what it claims to be: notes that are employed to approach a
"goal" or "target note", most likely a chord or scale tone that completes a melodic or harmonic
resolution of some sort - either temporary or final.

Approach notes can be a single note, or combinations of single and double notes of chromatic and/
or scale tones which approach the target note from below and/ or above. They are sometimes
referred to as "enclosures", since they tend to surround or enclose the intended target note.
Employing the use of approach notes is an important and time tested technique for creating tension
and release within an improvised melodic line, through delayed resolution as well as basic
ornamentation.

Although there are numerous possible chromatic and diatonic approach note combinations, there are
approximately two dozen which are the most common. Several of them are examined closely in the
following pages of this book.

All examples are presented in 12 keys.

A helpful primer for the material here is an earlier Shortbook™,“Chromatix”, which focuses on the
smaller intervals of half and whole steps, from which the bulk of diatonic and chromatic approaches
are formed.