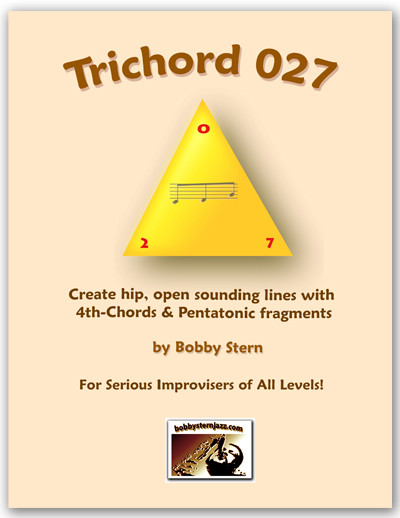 The 027 Trichord (aka 2+5, by its semitones, or Major & minor scale steps 1-2-5, in prime form) is a familiar sound, becoming popular among improvisers of the 1960's, and featured in the music of innovators such as John Coltrane, McCoy Tyner, Joe Henderson, Woody Shaw and many others of that period and beyond.

Because 027 (C-D-G, in C) in all its inversions (rotations) contains the intervals of a Maj 2nd, a Perfect 4th, and a Perfect 5th, it's relationship to the Pentatonic Scale becomes apparent. Adding a pair of P4ths to either end of an 027s 1st Rotation forms a pentatonic scale in fourths (i.e. E-A-D-G-C = C Pentatonic, or D-G-C-F-Bb = Bb Pentatonic).

The structure of the 027 trichord lends itself to open, quasi “in and out”, sometimes ambiguous

As with any trichord (defined as any 3-note grouping, usually non-triadic in the traditional sense), 027 has three rotations (inversions) - Prime (root position), as well as 1st and 2nd Rotation.

Due to its 1st Rotation, which consists of 2 consecutive Perfect 4ths, 027 is considered a unique, symmetric trichord. It's 2nd Rotation can be seen as a prime form trichord, as well (5+2 from G).

The 027 Trichord is a powerful tool for the improviser. Command of it will take one into fresh territory not realized through triadic harmony and “scale running” alone.