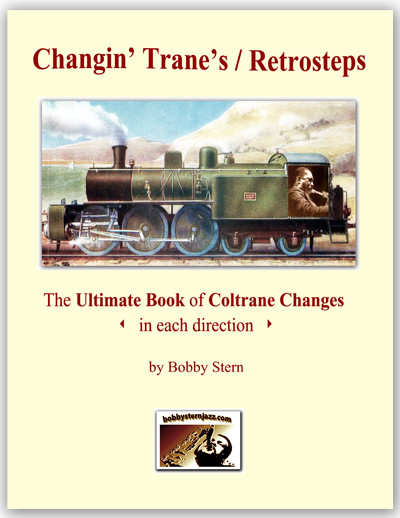 The Ultimate Book of Coltrane Changes

Major 3rds Cycles had been utilized to a degree by late 19th century classical composers, as well as in several American popular songs of the 1940's and '50's (The bridge of “Have You Met Miss Jones?” is most commonly cited). The Cycle of Descending Major 3rds was made famous by legendary saxophonist, innovator and 20th Century musical icon John Coltrane, who crafted it into several of his classic compositions - “Giant Steps”, “Countdown”, “Satellite”, “26-2”, etc. - which he recorded for the Atlantic record label in 1959 and 1960.

Its continuing popularity among improvisers as a challenging harmonic device has made the Major 3rds Cycle an almost mandatory subject of study by improvisers.

The exercises for both Descending and Ascending Cycles are presented here as 4-bar sequences, the first three measures being the full 3-bar cycle - resolving to the tonic chord in the fourth bar for 2 beats, moving to the V7 for 2 beats - which then resolves back to the tonic in the first bar of the same or next line.

They've been organized, per key, according to the starting notes of their first Major chord – Root, 3rd, 5th & 6th, (7th or 9th), as well as a page devoted to expressing the Descending Cycle with a single Augmented Scale.

Each sequence is transposed to all keys and each key has its own chapter.

The material presented in this book has not been transcribed directly from any one particular source. Rather, it's a result of years of listening to the masters - plus many hours of practice and assimilation. It should aid in broadening one's understanding, appreciation and skill level in creating and negotiating melodic lines through both variants of the Cycle of Major 3rds.

I sincerely hope you get the same benefit from it as I have and do.

As was John Coltrane's original intention, it will guide you “out of the ordinary path” and into your own imagination.