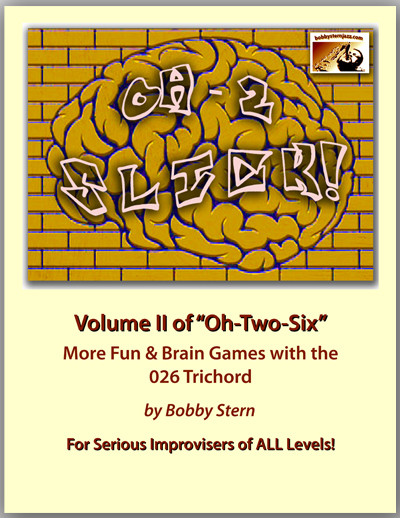 Much of the material covered here is derived from concepts which I first encountered several years ago in “Twelve-Tone Improvisation: A Method for Using Tone Rows in Jazz” (Advance Music) by saxophonist John O'Gallagher, as well as from guitarist Bruce Arnold (Muse-Eek.com), who has been performing, composing and teaching these concepts for a long time, and who recently turned me on to the joys of the 026 trichord and has helped me make sense of it all.

Since the release of the previous volume “Oh-Two-Six”, I've managed to obtain some additional clarity as to how 12-tone rows (comprised of the 12 non-repeating tones of the chromatic scale) are constructed. Thanks again to Mr. J. O'G's aforementioned book, which introduced me to the concept of “steering” as it pertains in particular to 026.

“Steering”, originally conceptualized by Dutch composer Peter Schat (1935-2003), describes the interval distance between trichords (or tones) in a particular row, and is a critical element in how that row is constructed.

As mentioned just previously, the presence of a tritone in 026 lends itself to potential dominant tension and resolution. Within the context of this book, which focuses on the 026 trichord within the framework of the popular I (or III) – VI – II – V harmonic progression, this translates into sequences involving the Cycle of Fifths.

Perpetual motion cycle sequences involving 026 trichords (2+4 & 4+2) descending by perfect 4ths or semitones, serve as warm-ups for the I – VI – II – V, as well the minor i – V – bVI – V sequences that follow. These cycle sequences do not necessarily take the row into account, but are designed to facilitate 026 movement around the cycle. These 3, 4 or 5-note units can usually be heard as dominant 7th chords (and their tritone substitutions), but can represent any chord formed by the alternating Whole Tone Scales.

Becoming familiar with any of the trichords takes time, practice and a whole lot of patience.

Because of the presence of the tritone, the 026 trichord – and subsequently, its rows and sequences – is probably the most familiar sounding (by close relationship to the Cycle of 5ths) and therefore, the easiest to hear and work with in a traditional sense.