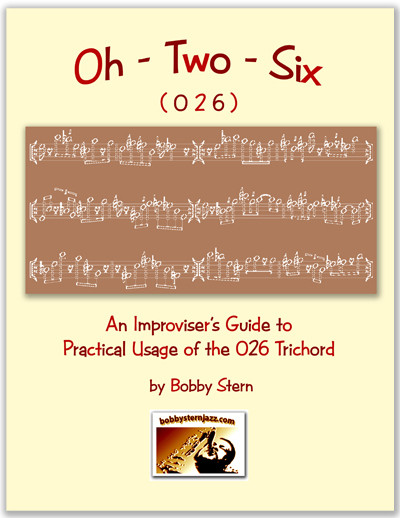 An Improviser's Guide to Practical Usage of the 026 Trichord

Since the inception of the improvisational art form we know and love as “Jazz”, melodic and harmonic techniques have steadily expanded in all directions – in some cases even disappearing altogether.

Presently increasing in the collective consciousness of many contemporary improvisers (guitarist Bruce Arnold and saxophonist John O'Gallagher lead the way), is the awareness and usage of the 12-tone techniques pioneered by the early 20th century European “serialist” composers – Berg, Webern & Schoenberg - being the most prominent among them.

The basic premise of this system is the employment of 12-tone rows – the 12 tones of the chromatic scale as equal entities, non-repeating and organized into different “pitch class sets”, or note groupings of varying lengths.

The major feature of 12-tone technique is the 12-tone row. In the strictest sense, a row employs all 12 tones before one is repeated. For the improviser, this rule is thankfully, a bit more relaxed. As a basic unit in our case is the trichord, a 12-tone row is made up of 4 of them. Notes can repeat within a trichord, but not between them in the row.

The bulk of “Oh-Two-Six” presents I-VI-II-V sequences based on 4 different rows.

In this section, all rows and sequences are presented in all 12 tonal centers.

These are just a few examples of what is really only the tip of the iceberg of possibilities.

The 026 trichord is familiar to the ear, and because of its inherent tritone, it tends toward tonal resolution. It's relationship to both the Whole Tone and Diminished Scale systems, as well as the Cycle of 5ths, allows one to create intervallic melodic lines that avoid shop worn cliches.