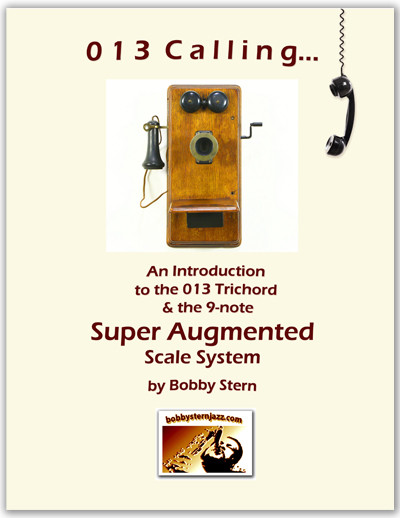 This scale was originally referred to as "Super Augmented" in a blog post from several years ago.

Among other names, it's been identified primarily as the inverse of Messaen's 3rd mode of limited transposition, as well as "Tcherepnin Nonatonic Mode 1", "Genus Chromaticum", and "Augmented Nine".

I'll still go with "Super Augmented", however, since among other aspects of its scalar construction, it contains two overlapping 6-note Augmented Scales, linked by a common

The focus of the remainder of "013 Calling... Super Augmented" is based on the melodic structure formed by three 013 trichords a Major 3rd apart.

Once we've recognized Super Augmented as its own unique nonetonic scale system, we can break it back down to its more conventional compounds.

• the fusion of 2 adjacent Augmented Scales , linked by a common Augmented triad, as well as

There are dozens of ii-V7, et al, sequences in all 12 keys. Because any one Super Augmented scale might have multiple key centers (incl “Coltrane Changes”), resolution of these sequences focuses on Maj, min and the relative min of the key in question.

Exploring the 013 Trichord and Super Augmented scale system can be both entertaining and engaging. It provides a method of incorporating certain elements of chromaticism, in an effort to break old habits and create, from an individual standpoint, something fresh and disitinctive as an