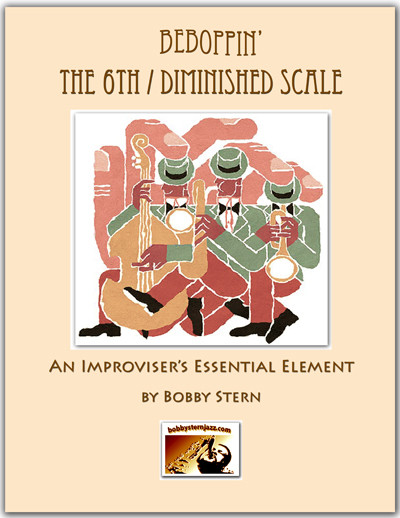 A study and practice volume containing creative exercises and sequence material gleaned from the Major 6th / Diminished (aka Bebop) Scale.

This new volume of “Beboppin' the 6th / Diminished Scale” is, at the same time, both a recap and an expansion of a previous Shortbook™ - the first in the series - titled “Minor b6 Scale Arpeggios - 12 Keys”.

As that title suggests, the focus of its contents was on exercises and sequences created from the (Melodic) Minor “Bebop Scale”, while the accompanying blog post explained the term, coined by jazz education pioneer David Baker in the 1970s, as well as its history as a melodic device introduced by the Bebop pioneers of the 1940s.

Enter legendary pianist and jazz-ed icon, Barry Harris - who introduced and teaches this scale not only as a melodic device, but as a complete 8-note harmonic system.

In one of the features of this system, inversions of the resulting 4-note chord structures – alternating Maj 6 & dim7 - built on diatonic 3rds, are utilized to create a continuous, built-in I - V7b9 - I harmonic movement, which can most commonly be employed over static Major Harmony of more than a measure.

In this volume - featuring the Major 6th / Diminished scale - as in the previous one, the accent is on exploring this latter system, with the focus being on single lines, permutations and arpeggios, both for practice and practical use.

The so called “Bebop Scale” is an essential part of the improviser's tool box. Add to that, its harmonic implications put forth by Barry Harris, as a self contained, 8-note harmonic system and a whole other realm of possibilities opens up.

As a study guide, “Beboppin' the 6th / Diminished Scale” attempts to uncover but a few of those inherent possibilities, through the exercises and sequences found within these pages.