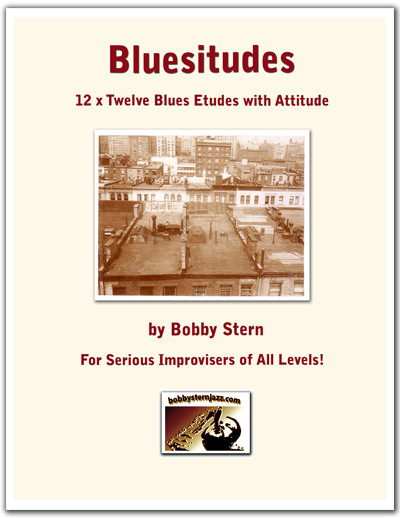 The 12 Bar Blues form is probably the most recognizable song form across all styles of popular and world music.

Its organic simplicity and malleability has made it accessible, not only to musical artists of all genres, but to the listening public as well.

While an earlier Shortbook™ “Blues Deep: Fifty” focused primarily on the phraseology of the original, primal Blues, as well as the construction of the so called “Blues Scale” and it's relationship to (and result of) the natural overtone series, “Bluesitudes” attempts to demonstrate, from a harmonic point of view, just a few of the modifications to the standard 12-bar Blues form which, over the years, have come into play.

The 12 Blues etudes in this volume are each based on a unique harmonic modification of the “basic” 12-bar form.

Each of these dozen 12-bar “Bluesitudes” is transposed, by chapter, to all keys.

Playing through them in different keys on a regular basis will not only improve your technique and ability to hear and recognize harmonies, but will increase your knowledge and appreciation of Blues forms in every aspect, as well.