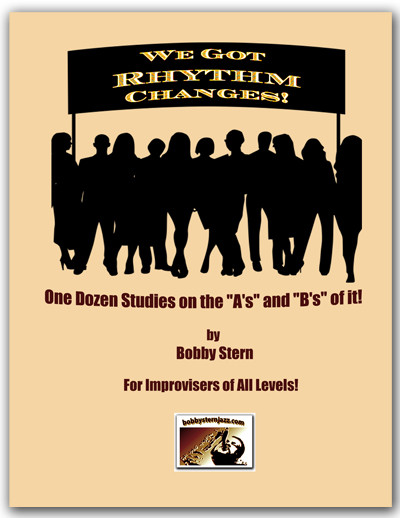 We Got Rhythm Changes!

One Dozen Studies on the &quot;A&quot;'s and &quot;B&quot;'s of it!

For Improvises of All Levels!

The seminal chord changes to George Gershwin's 1930 classic "I Got Rhythm" became popular among swing era musicians of the 1930's and '40's. With creative modifications, they became iconic to the post WWII bebop era and beyond, being referred to simply as "Rhythm Changes".

became one of the most popular (and flexible) vehicles for improvisation.

Many classic lines or "heads" were composed over "Rhythm Changes". Some of the best known are:

on a repeating I -vi - ii -V7 progression, one of the most common in western music - its root

movement being based on the cycle of fifths.

As chord substitutions and alterations were gradually introduced, a number of different "versions" of "Rhythm Changes", began to appear.

"We Got Rhythm Changes!" presents a dozen of these stylistically diverse "A" and "B" section "Rhythm Changes" etudes in separate chapters, so that one can focus on each section individually.

Any "A" section can be combined with any "B" section.

"Who could ask for anything more?"