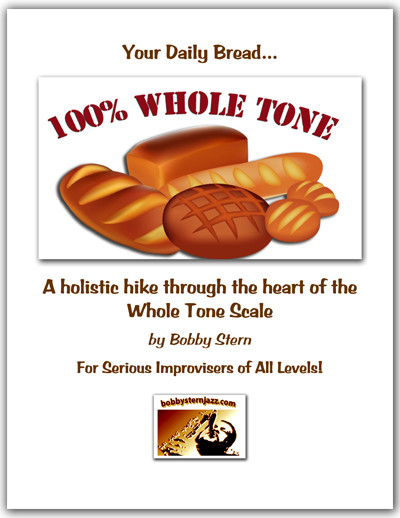 A holistic hike through the heart of the Whole Tone Scale

"100% Whole Tone" explores some of the improvisational possibilities and applications of the somewhat ignored and under appreciated Whole Tone Scale.

The Whole Tone Scale, as you may know, is a symmetrical hexatonic (6 note) scale in which the intervallic distance between each of its inherent tones is that of a Major 2nd, or whole tone. Its layout is palindromic, meaning that it's interval makeup is the same ascending as it is descending, regardless of its starting note, or "root".

Because of it's lack of certain basic intervals derived from the natural overtone series, such as the perfect 4th & 5th, the Whole Tone Scale has a somewhat ethereal quality, but could be seen as being melodically and harmonically limited or even boring to some degree.

However, it might also be compared to the two Knights on a chessboard - unique, quirky and extremely effective when used properly - especially in tandem with each other.

Since the Whole Tone Scale is produced from six equal divisions of the octave, there are only two transpositions of it - meaning that there are really only 2 mutually exclusive whole tone scales - which together, make up the 12 tones of the Western chromatic scale.

t's important to understand that just because there are only two mutually exclusive Whole Tone scales, there are still 12 chromatic scale points which could be potential "roots" or "key centers" for any phrase, shape or sequence. It's crucial to be aware of this as it's a bit more involved than just running up and down each of the two scales.

And herein lies the premise for the exercises and sequences in "100% Whole Tone".

Going back to the analogy of the two Knights with their quirky moves working together on a chessboard, it should be acknowledged that the legendary Thelonious Sphere Monk was the undisputed chess master of this Whole Tone Scale technique.

To sum it all up - the Whole Tone Scale is a colorful and expressive alternative for the improviser.

Alternating between the two transpositions of this 6 note scale creates harmonic motion not available with a single WT scale by itself.

The exercises, sequences and patterns presented in "100% Whole Tone" are a fun and productive way to get inside the Whole Tone Scale, while building technique, familiarity and confidence with this concept.