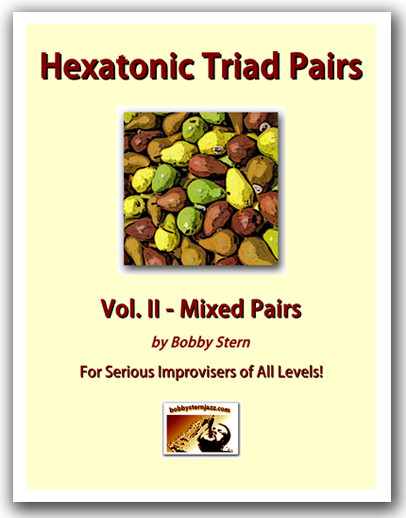 “Hexatonic Triad Pairs II – Mixed Pairs” is the second volume of exercises and sequences aimed at the improvising musician, exploring the subject and usage of triad pairs. It logically follows the concepts introduced in Vol. I, which focused exclusively on the Maj & min triad pairs derived from the Maj Scale system.

The formatting and layout of "Hexatonic Triad Pairs II - Mixed Pairs" is identical to Vol. I. However, the characters and scenery have changed, which alters the story line here considerably, meaning that the exercises, sequences and shapes from the previous volume have been altered to fit the construction of those in this volume.

The 4 triad pair / hexatonic configurations examined here in Vol. II - each derived from a different scale system - are:

Each of the above listed triad pairs / hexatonics is given a 48 page chapter and transposed to all 12 keys.

As in Vol. I there is a final chapter of ii-V7 sequences, which illustrate combinations using all four triad pairs from the previous chapters of this volume.

Even more possibilities open up when combining triad pairs from this volume with those of Hexatonic Triad Pairs, Vol. 1.

Triad pairs are yet another valuable tool to be used by the improviser in the creation of musical lines and statements.The main objective is to turn these exercises and sequences into real music.

They should be played and practiced in all directions, using rhythmic diversity (rests, triplets, etc.) to break up the constant stream of eighth notes.

In other words....Experiment! Concepts, inversions and permutations from “Triadicisms, Vols. I & II” could be incorporated here with great effectiveness.