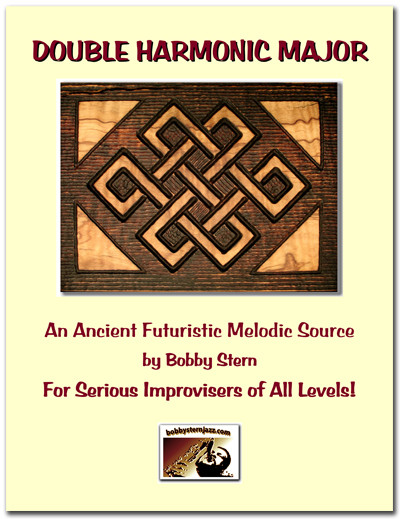 Throughout history, the scale known theoretically as Double Harmonic Major (aka Byzantine Scale, Melakarta #15, Ionian b2 b6), has been a prominent ingredient in numerous musical cultures around the world.

This scale (and its modes) is the Western equivalent of an early tone collection that is indigenous to Greece, Turkey and the Balkans, as well as North Africa & India, where in the south (Karnataka), it's the first scale (Melakarta) taught to young Carnatic music students.

Because of its unique interval make-up, consisting of four Augmented 2nds, as well as its resulting "Eastern" flavor (to Western ears, at least), it has remained a challenge to harmonize in the normal fashion, as many of the usual harmonic cadences and resolutions are not available or functional within its scale system. At the same time, it remains as a largely untapped source of inspiration and material for the improviser and composer willing to investigate and experiment.

Double Harmonic Major is a palindromic scale, meaning that its interval scheme, expressed in semitones (1-3-1-2-1-3-1) - is identical in both ascending and descending directions . For instance, the word “racecar” - with its identical spelling frontwards and backwards - is an example of a palindromic word.

Double Harmonic Major has been around for a long, long time, but hasn't really made its way into the Western musical vernacular, as such. Its melodies are "exotic" sounding and it doesn't naturally lend itself to the typical cadence reliant formula of Major Scale harmony. Its inherent chord formations can be interpreted as dark, dissonant, mysterious & beautiful.

So don't give up on this baby! As an ancient / futuristic melodic source, it's got nothing but potential – depending on our imagination - to be heard in ways yet to be.