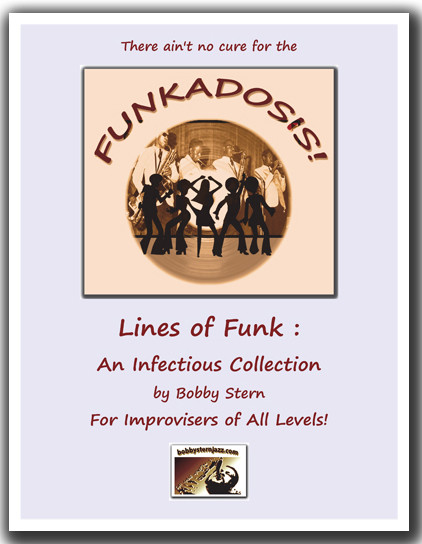 There ain't no cure for the Funkadosis!

“Funkadosis!&amp;quot;, is an intuitive collection of funk &amp;quot;riffs&amp;quot; and lines, which captures the essence of this ever popular and danceable musical genre.

This volume of “Funkadosis!",
is an intuitive collection of funk "riffs" and lines, which captures the essence of this ever popular and danceable musical genre.

Broken down into three sub-categories, and organized by key, they include:

Working the lines in this book through all 12 keys is a fun & productive way to become familiar with both the lines & the keys. While the lines themselves tend to be harmonically static, they can be rhythmically involved, demanding a certain level of finger dexterity.

Although no chord changes are given, the approximate harmonic environment throughout, might best be determined as a dominant 7#9, with Dorian, Mixolydian, Blues or Gmin6 being the most common scale colors; with Altered and Diminished thrown in with some of the Fusion Funk lines.

One thing to remember - that unlike neurosis, psychosis, acidosis or halitosis, ...there ain't no cure for the Funkadosis!