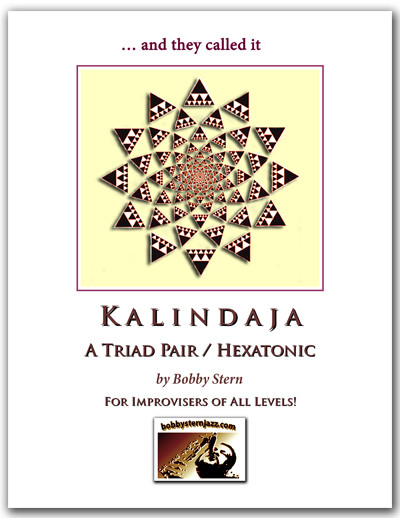 The focus of this Shortbook™ is a beautiful, exotic (sounds good already), and not all too
unfamiliar sounding triad pair / hexatonic scale (or "pitch collection", as is the fashionable term),
which can be said to be derived from several different sources - both theoretically & culturally.

From a Western point of view, it can be derived from the 5th mode of Harmonic Minor (or Major)
while omitting the minor or Major 3rd, as the case may be, of its parent scale (in parenthesis,
below).

This creates a hexatonic (6 note) scale.

From a Carnatic (South Indian) point of view, this janya raga or "derived scale" comes directly
from the 14th Melakarta "Vakulabaranam", which is the Carnatic 7-note tonal equivalent of the
Western 5th Mode of Harmonic Minor, as previously described.

Omitting the sixth scale degree,
or "da", leaves us with our 6 note janya raga....and they called it Kalindaja (pronounced Ka - LIN
- da - DSHA)...and therefore, so will we.

All sequences and exercises are expanded and presented in all 12 keys.

When practiced in all keys, "Kalindaja" the book's 80+ pages of exercises and sequences are a fun, effective and sweet-sounding way to cover each and every Major & minor triad and their inversions, as well as every diminished seventh chord.