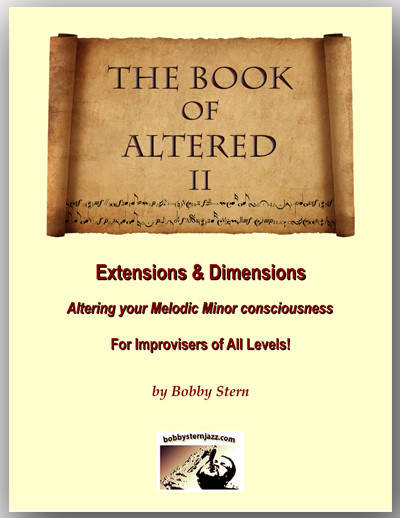 “The Book of Altered II- Extensions & Dimensions" is the follow-up and expansion of the first “Book of Altered” (available here), the main focus of which was the usage of material from three different Melodic Minor systems within a typical minor ii-V7-i cadence. The so named “ACE” ii-V7-i formula, which refers to the letter names of the trio of Melodic Minor Scales, is once again featured here (ACE in your FACE).

The bVI7-V7-i sequences in each key expands upon the concept found in Book I, in that the basic material used for the sequences here is a Melodic Minor derivation – the Pentatonic b6. Unlike the Maj Pentatonic, which has no tritone, the resulting tritone contained in the Penta b6 allows it to work well on altered dominant chords (7 #9 b13).

Also presented here is the concept of resolving a V7alt to a tonic Major 7+5 chord , building it from the 3rd degree of Melodic Minor (Lydian Augmented). The I Maj7+5 chord (C-E-G#-B) is often used as a substitution for the more common tonic Maj7 or Maj7#11. In the case of the C Maj7+5 in the example above, its parent scale, A Melodic Minor, contains the #11 (F#), as well the +5.