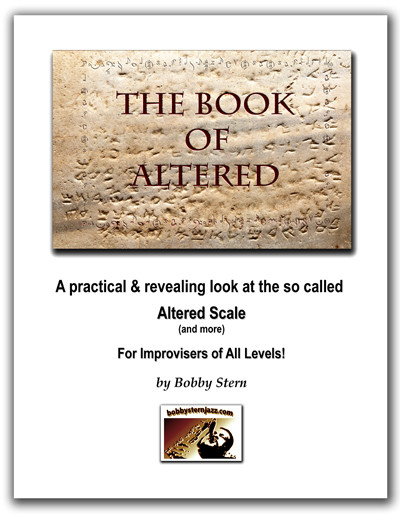 The Book of Altered

So what is it? The Altered Scale or Melodic Minor?

Since we'd all probably agree that the so called “Altered Scale” (aka "Altered Dominant Scale", "Diminished / Whole Tone Scale", "Pomeroy Scale", and Locrian b4, et al) is derived from the Seventh Mode of Melodic Minor - which is itself derived from the Major Scale matrix - we've pretty much answered our own question.

Look at it this way - as unique as it is unto itself, the city of Paris is still part of the country of France - so if you're in Paris, you're also in France.

The point here is that, the simplest route in finding the most effective way to master and utilize the "Altered Scale" is to think of it in terms of the Melodic Minor scale/ key of which it is a part (i.e. seventh mode of).

"The Book of Altered" is an expansion of a few of the concepts first published in "The Melodic Minor Handbook (Aebersold)", in 2005. The focus of this new Shortbook™ is on minor ii-V7-i sequences, which employ the "ACE" 3 Melodic Minor scale / key method, as well as bVI7-V7-i and i-bVI-V7-i sequences.

"The Book of Altered" also explores Melodic Minor usage with the bVI7-V7-i cadence, which is most commonly found in the last four bars of a "Mr. PC" type of Minor Blues.

Whether or not one is already familiar with the basics of the Melodic Minor "Altered" harmonic system, the material contained within the pages of The Book of Altered is sure to inspire one to further investigation and discovery.