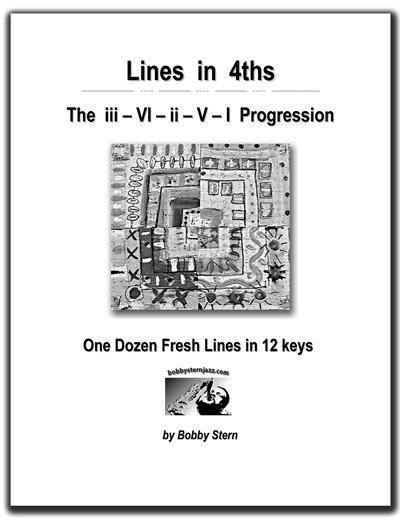 Lines in Fourths - The iii-VI-ii-V-I Progression

A dozen fresh lines in 12 keys!

The interval of a perfect 4th has been an important melodic and harmonic component of the improvising musician's language since the early 1960s, being introduced and popularized by pianist McCoy Tyner, and featured in the compositions and solos of pianists Herbie Hancock & Chick Corea (among others); B3 organist Larry Young; saxophonists John Coltrane, Joe Henderson, Wayne Shorter and Joe Farrell; as well as trumpeter Woody Shaw and guitarist Karl Ratzer, to name just a few.

The exercises contained in this short book are in the form of 12 individual melodic lines in 4ths, transposed to all twelve keys.

Augmented 4ths (diminished or flat 5ths), diminished 4ths (sounds and functions as a Maj 3rd; derived from the Melodic Minor system), as well as perfect 4ths are all featured in these melodic lines, which are built over the premise of a iii-VI-ii-V-I chord progression.